This post describes the latest tooling to help test Android Coroutines, provided as part of the kotlinx.coroutines test libraries, which aim to “provide utilities for efficiently testing coroutines”.

This blog post covers how to test the following scenarios involving coroutines:

Testing code which creates or uses coroutines has always been a challenge in Android. There have been a few official tools and libraries provided previously which sort of worked, but came with challenges and gotchas. Now, as of around December 2021, we have a new contender to simplify testing coroutines.

A module specifically to improve testing coroutines and code which interacts with coroutines. The official docs are definitely worth reading, and this blog post serves to complement them with additional explanations as to why they’re needed.

Add one or both of the test dependencies below to get started, depending on whether you run JVM-based unit tests, instrumentation tests or both. These should be added to your build.gradle file.

Let’s pretend we have a class which does some hard work. This class adds a lot of numbers to a list, and sorts and shuffles them over and over for a while, before returning the first number of the sorted list, which is always 0. But really that’s not important here; what is important is that it does too much work to be called on the main thread. 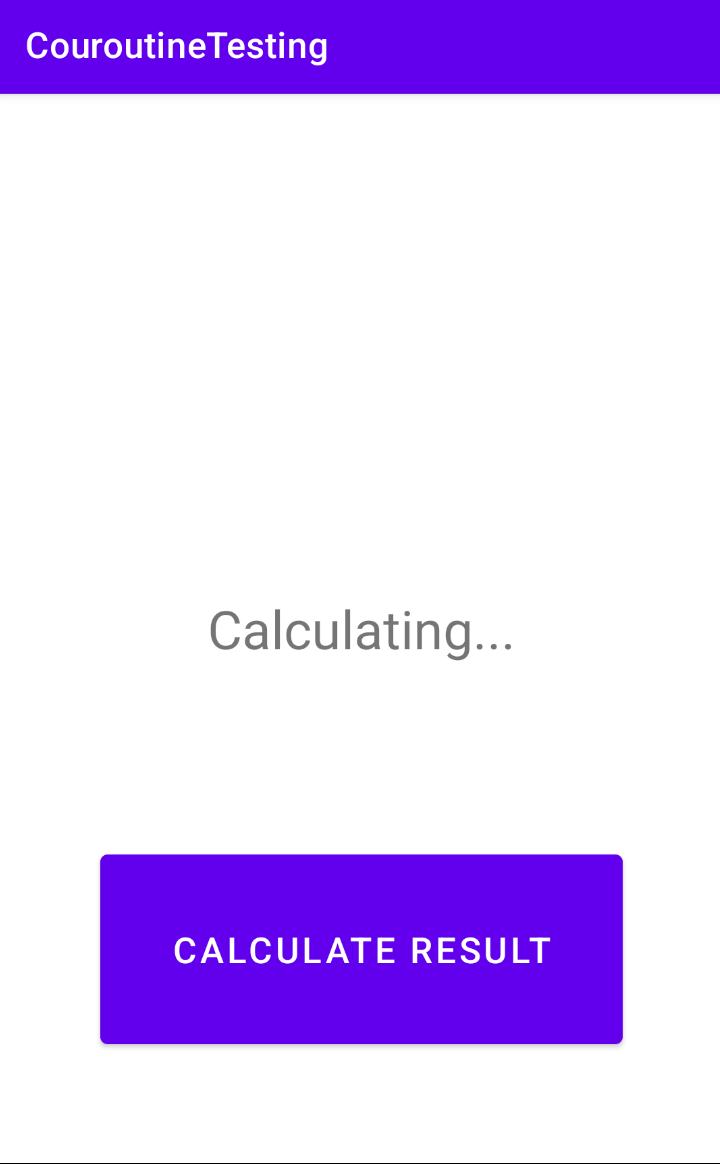 Adding coroutines into the example

If we try to call that code as is, the UI will completely freeze as we try to do too much work from the main thread. Let’s modify NumberCruncher to make use of coroutines so that it delegates the CPU-intensive work to another thread.

We’ve made getResult() a suspend function, and ensured the heavy CPU work is done away from the main thread using withContext(Dispatchers.Default). When we run the app now, we can see the UI does not freeze, and we can see the temporary calculating... message. Huzzah! But let’s not celebrate too quickly; we’ve still got to write unit tests for our NumberCruncher class.

Writing a unit test for code that calls a suspend function

The compiler won’t let us call numberCruncher.getResult() like this since it is a suspend function, meaning it can only be called from a coroutine.

Attempt 2, launching a coroutine from the test ❌

If you try launching a new coroutine inside your test like this, you might be pleased to see the test passing. However, this isn’t working at all, and if you were to change that assertion to expect any other value, the test would continue to pass. This is because the test is finished before the calculation can finish, and before the new coroutine can even start.

💡 This is why you should always start with a failing test, then make it pass.

Previously, for testing coroutines, there were a few options including using runBlocking, and runBlockingTest. However promising these seemed, there were always scenarios where they didn’t work as expected or were error-prone. In a blog post I wrote about this a few years back, I noted a scenario where runBlockingTest should have worked, including linking to a long-running PR which promised a fix was coming. However, it never did. Instead, that PR was closed off in favor of the new coroutine testing tooling.

In short, this isn’t the solution you’re looking for either. It might work in some cases and confusingly not work in others. However, don’t despair, help is at hand.

As promised, the latest coroutine testing tooling offers a solution with the introduction of a new coroutine builder specifically to be used in tests, called runTest.

🎉 This time, we have success. The runTest coroutine builder means you can test your code which calls suspend functions, and doesn’t come with the same problems that its predecessor runBlockingTest had.

In the above example, our NumberCruncher exposed a suspend function. However sometimes you will be trying to test code that internally launches new coroutines.

We’ve made our code more reactive, since reactive code is in fashion 👔. Before, we could call getResult() and wait for the result to be returned. Now, we can request a new result be calculated but it won’t be returned there and then; instead, it will be emitted from a Flow shortly afterwards when it’s calculated.

Testing this kind of code is harder than before. Because this code internally calls launch to create a new coroutine (and doesn’t expose the Job externally) ensuring the logic is executed while the unit test is running is important. We don’t want to hit the problem from before when the unit test completes before the coroutine has been launched, as we aren’t testing what we think we are testing if that happens.

This looks like it should work, and indeed running it you’ll find the test passing, but it will take a while. The reason it’s so slow is because that delay(5_000) we added is being respected even in the unit test. Why isn’t runTest doing what it claims to do in the docs: “The calls to delay are automatically skipped”? The answer is given in the docs in the section called Virtual Time Support With Other Dispatchers.

We need to stop hardcoding the dispatchers using code like Dispatchers.Default and instead provide a way to inject dispatchers into classes. One simple mechanism I use for this is to define a DispatcherProvider interface.

This interface defines defaults for each of the main dispatchers you’ll already be familiar with, and also defines a ready-made class called DefaultDispatcherProvider for convenience. To use this, we pass a dispatcher provider into the constructor of a class, like this:

In production code, the default parameter value is used, meaning you don’t have to explicitly provide it anywhere. But the value now is that while unit testing, you can provide an alternative version which uses a TestDispatcher instead of a real one. For convenience, some of the boilerplate required in each test can be encapsulated in a test rule.

Now, you can apply that test rule and use its test dispatcher provider when creating your class under test.

Let’s summarise what we have done:

This test passes, and passes quickly as it now rightfully skips the delay().

ℹ️ The new tooling offers lots of control over execution of coroutines which isn’t covered in this post. For more details on that if required, you should check out the javadocs for UnconfinedTestDispatcher and StandardTestDispatcher, along with functions available inside of the runTest block to control virtual time.