This post describes how to use TestCoroutineDispatcher to write efficient and stable unit tests for code written with coroutines.

In order to reliably unit test a suspend function written with Kotlin Coroutines, there are a few things we need to know.

Ideally beyond that, we will want to know how to make our unit test run as fast as possible, and not sit around waiting for a coroutine delay to finish.

This post will describe how to achieve this so you can quickly and reliably unit test suspend functions.

We are going to use the kotlinx-coroutines-test library, so we’ll need to add that to our dependendies in build.gradle.

Add the following class to your project - it can be included alongside your unit tests.

Apply the unit test rule to your unit test class.

With that setup done, we’re now ready to proceed.

Let’s take the following HeavyWorker class as an example. It has a heavyOperation() function which is suspendable. Our goal here is to write unit tests for it that are stable and run as quickly as possible.

What are my options?

🤔 If you’re looking at the three options and wondering why they have such similar names, what the differences are and why they don’t all work, I don’t blame you. It’s confusing! And worse still, some will work for some suspend functions but not for others.

Let’s go through each in turn and highlight the problem with that approach before finally explaining why the TestCoroutineDispatcher.runBlockingTest approach is a good one.

In this example, even with the long operation, the unit test will patiently wait for the coroutine’s completion before successfully passing. Depending on your hardware, this might take a few seconds to complete.

But crucially, it does pass. 🎉

OK, that was too easy. Let’s make things a bit trickier and see where runBlocking begins to fail us. Let’s see what happens if the heavy worker code had reason to delay() for 30 seconds during its execution.

In this case, runBlocking<Unit> waits for the entirety of the delay period, meaning your unit test takes an additional 30s to run on top of the time it actually takes to crunch the numbers.

runBlockingTest was introduced as a newer coroutine builder than runBlocking, specifically to help improve in areas such as not having to wait for the full delay period. Other features listed:

This is all sounding really great, and likely to improve some areas of testing massively. However, it doesn’t work for this code 😢

Specifically, the test will fail with the following reason:

runBlockingTest is smart enough to realise that you have a job started during your unit testing and that it hasn’t finished yet.

The fact that the unit test finishes before the invoked Job finishes is bad. Your unit test which was stable albeit a bit slow using runBlocking now breaks. That’s not much of an improvement 😞.

Why Doesn’t This Work? 😕

This feels like it should work, and I don’t know why it doesn’t. Maybe it’s a bug in the current implementation of runBlockingTest. Maybe I’m trying to get it to do do something it isn’t designed to do. I’ve reached out to some folks who are building this to clarify.

UPDATE: Manuel confirmed that the above example should work, and indeed, runBlockingTest should work in all cases where you currently use runBlocking.

The expectation is right, it should work. There's an open issue about this: https://t.co/HGDX9XM3NB

You'd still need to inject a TCD if a new coroutine gets created in code under test. Moving to a different thread (e.g. using `withContext` in a suspend fun) should pass.

Basically, it should work for all those cases you currently use `runBlocking`.

So watch https://github.com/Kotlin/kotlinx.coroutines/issues/1204 for updates on when that is resolved.

This approach is very similar to the one we just tried (and failed) to use, but with a crucial difference; we’ll provide alternative coroutine dispatchers when running in a unit test to those we’d use in production.

And after providing an alternative coroutine dispatcher, used only when unit testing, we’ll make use of the dispatcher’s runBlockingTest builder.

The conclusion I’ve drawn is that we need to inject our dispatchers. I tried to find alternatives to doing this, as I don’t love having to inject dispatchers into production code, but I can’t find an alternative; it seems necessary. 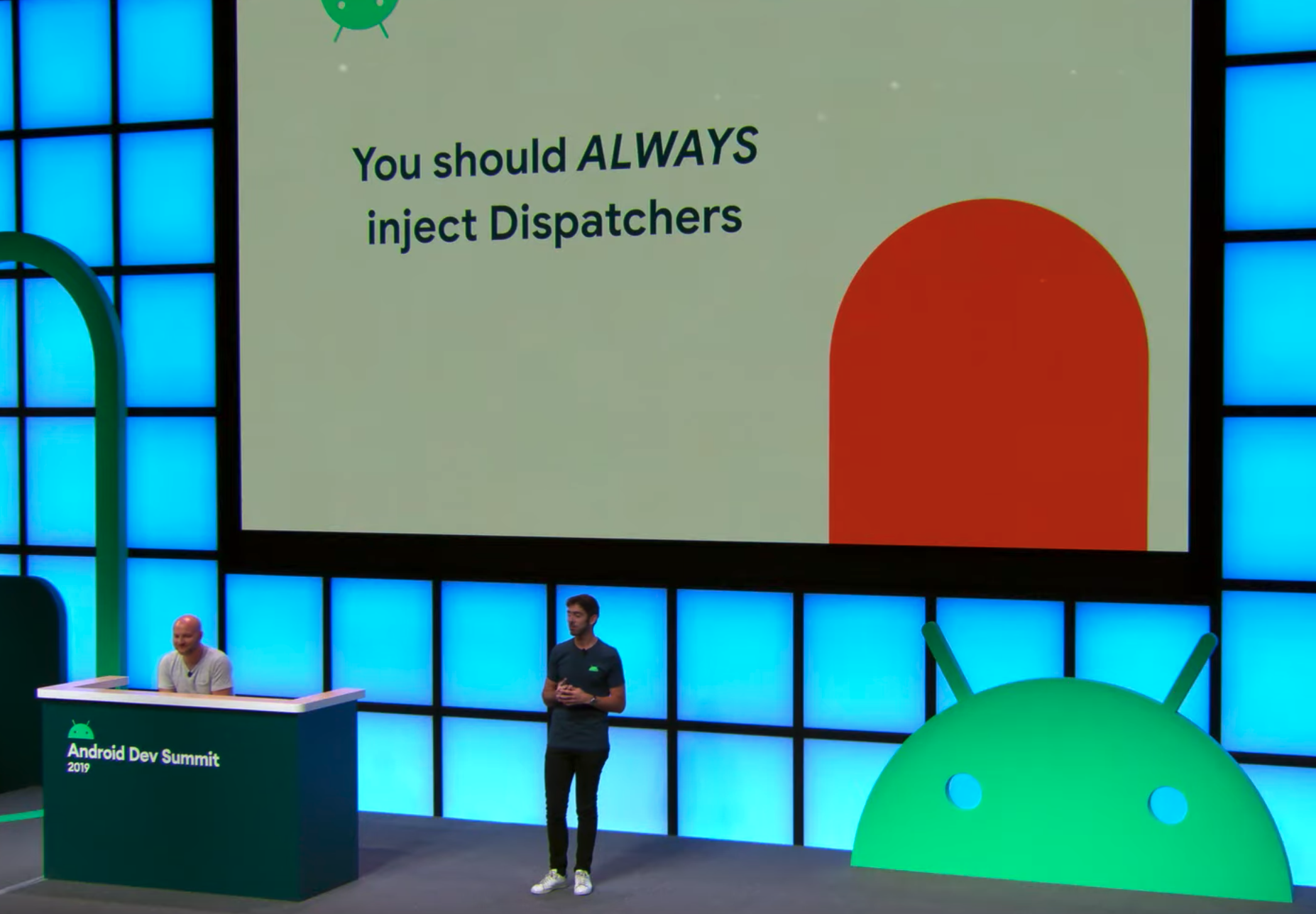 And it seems Sean McQuillan and Manuel Vivo agree ☝️; this was taken from their 2019 Android Dev Summit talk “Testing Coroutines on Android”

What does it mean to inject our dispatchers? Let’s revisit our production code, and note the highlighted line.

In the example above, we used Dispatchers.Default but we know there are other common dispatchers that we might encounter. As such, let’s define an interface which will allow classes to obtain whichever dispatcher they require.

We define the interface and provide functions for the dispatchers, each of which have a default implementation.

Additionally, we define a DefaultDispatcherProvider default implementation of the interface; this is what we’ll use in our production code.

In production, we’ll always use this default dispatcher provider, which will always result in using Dispatchers.Main, Dispatchers.IO etc…, and the production behavior will be as it always was.

In unit testing, however, we will not use this default dispatcher provider; we will provide an alternative version.

Now that we have interface defined, we need to modify HeavyWorker class to make use of the interface instead of fetching the dispatchers in its current hardcoded fashion. To do this, we can inject the interface into the constructor.

Note the highlighted lines, above.

Since you are specifying the default implementation of the provider should be used in production, you never have to actually pass a parameter when instantiating this class in production. HeavyWorker() is still a valid way to construct the class, just as it was before.

We no longer hardcode dispatchers to use Dispatchers.Default and instead use the provided dispatchers.default(). To be clear, the production behaviour here would use DefaultDispatcherProvider by default, and therefore no behavioural changes have happened in production 😌.

We now define an alternative dispatcher provider that we’ll use during unit testing.

You can define this wherever you like so long as it has access to the test dispatcher, but I chose to add it inside the CoroutineTestRule itself.

Using TestCoroutineDispatcher.runBlockingTest as our coroutine builder, and injecting the test dispatcher, allows us full control over the coroutine jobs created when unit testing.

It allows us to achieve the reliability we need, combined with the speed in not having to wait for delays to end.

In this post, we saw how to write a reliable and fast unit test for code which uses Kotlin coroutines; specifically, how to unit test a suspend function.